Spaced repetition incorporates the ideas behind the guidelines of: Optimize Motivation, Accommodate All Learning Styles, Limit Course Content, Provide Feedback, Implement Mastery Learning and Assign Frequent Deadlines. Spaced repetition is the guideline which has been shown to provide the greatest improvement in learning retention when memorization of facts is required.

Although the principle is useful in many contexts, spaced repetition is commonly applied in contexts in which a learner must learn a large number of items and retain them indefinitely in memory. It is therefore well suited to subjects requiring the memorization of a large nymber of new definitions or facts such as the subjects of foreign language, history and anatomy.

With the increase in access to personal computers in the 1980s, spaced repetition began to be implemented with computer-assisted language learning software-based solutions,[5] enabling automated scheduling and statistic gathering, scaling to thousands of cards scheduled individually.Template:POV-statementTemplate:Cn To enable the user to reach a target level of achievement (e.g. 90% of all material correctly recalled at any given time point), the software adjusts the repetition spacing interval. Material that is hard appears more often and material that is easy less often, with difficulty defined according to the ease with which the user is able to produce a correct response.

There are several families of algorithms for scheduling spaced repetition:

Some have theorized that the precise length of intervals does not have a great impact on algorithm effectiveness,  although it has been suggested by others that the interval (expanded vs. fixed interval, etc.) is quite important; the experimental data regarding this point are mixed.

Graduated-interval recall is a type of spaced repetition published by Paul Pimsleur in 1967.[6] It is used in the Pimsleur language learning system and is particularly suited to programmed audio instruction due to the very short times (measured in seconds or minutes) between the first few repetitions, as compared to other forms of spaced repetition which may not require such precise timings. 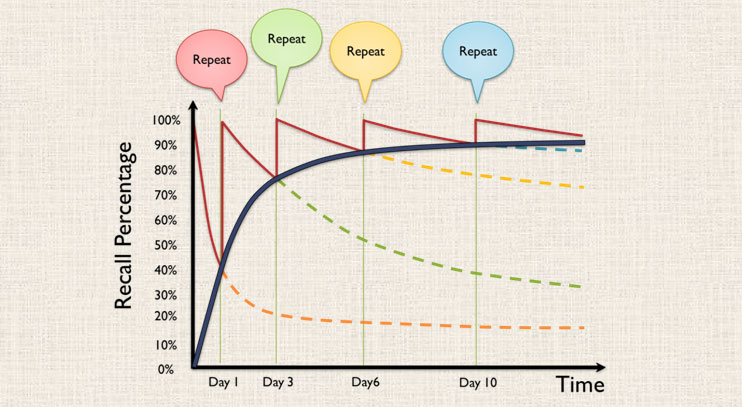 By timing a Pimsleur language program with a stopwatch,Template:Or it is possible to verify that the intervals are not followed exactly but have upper and lower bounds. A similar principle (graduated intervals with upper and lower bounds) is used in at least one open source software project (Gradint) to schedule audio-only lessons. (Another open source project, PimSched, keeps Pimsleur's intervals rigidly, without adding upper or lower bounds. PimSched currently uses only the first 4 intervals.)

Most spaced repetition software (SRS) programs are modeled after the manual style of learning with flashcards: items to memorize are entered into the program as question-answer pairs. When a pair is due to be reviewed, the question is displayed on screen, and the user must attempt to answer. After answering, the user manually reveals the answer and then tells the program (subjectively) how difficult answering was. The program schedules pairs based on spaced repetition algorithms. Without a program, the user has to schedule flashcards; this is time-intensive and limits users to simple algorithms like the Leitner system.

Further refinements with regard to software:


Cite error: <ref> tags exist, but no <references/> tag was found
Retrieved from "https://teachwell.fandom.com/wiki/Use_Spaced_Repetition?oldid=4843"
Community content is available under CC-BY-SA unless otherwise noted.